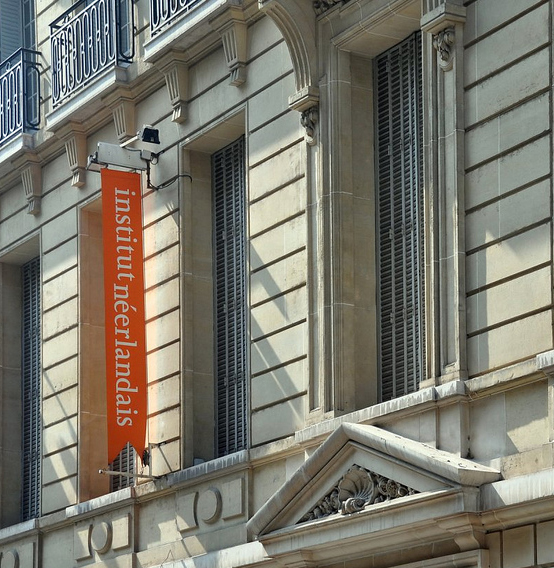 Taco and Daniel gave a presentation on Dutch art magazines at Orange Weekend in Institut Néerlandais in Paris during the weekend preceding the Royal inauguration. We have a large variety of art magazines in Holland. Some exist for quite some time like Metropolis M, Kunstbeeld and Mister Motley, others are fairly new like the recently launched Extra Extra, nouveau magazine érotique and Arts Holland Magazine, of which the second issue just came out.

Due to governmental budget cuts, art magazines are experiencing financial difficulties that result for some in a shift from paper to online only, if they can keep on existing at all. It is expected of art magazines to sell advertisements, but the institutions that would place those are cut as well, so what to do? Despite these difficulties (art) magazines are in popular demand. A visit to Athenaeum Nieuwscentrum in Amsterdam shows that there is an abundance of magazines, most about lifestyle and fashion and others dedicated to art, design and architecture. The beautiful and stylish Fantastic Man, made by Gert Jonkers and Jop van Bennekom, feature the artist Jeremy Deller on the cover of their latest issue. Most fashion, lifestyle and interior magazines devote articles to art. So, there is interest in art by a broader population than some might think.

Here are two examples of magazines that are more than only a paper mag, but have attracted a crowd that wants to affiliate with them, we even might call it a community, or at least a fan base. Das Magazin is not so much about art but about literature, well that’s art to me, so I dare call it an art magazine. The first edition came out in September 2011 after is was crowdfunded on platform voordekunst.nl, as the initiators Toine Donk and Daniel van der Meer said: “despite the economic cycles, as Keynes would have liked it”. In 2012 the first complete issues of 84 pages were published and sold out in no time. Recently the fourth full edition came out. After the organization of eight well attended literary talkshows, they will organize Das Magazin Festival on May 18th. 30 reading clubs with 30 different writers and 25 attendants per club and an afterparty. So it pays off to bring a magazine to life.

Another initiative that is worth mentioning here is Club Donny, that will celebrate its tenth edition soon. Club Donny is a strictly unedited journal on the personal experience of nature in the urban environment. The editors invite participants to share their personal experience on nature in cities from all over the world. In addition to the magazine, Club Donny sees itself as a club in the sense of a ‘glocal’ community where people from all over the world can gather and share their images and stories on local nature in a free and democratic way. The magazine is impressive in its simplicity and ingenuity. Photographs that have been submitted (unsolicited) through the website are reproduced as a stack of double-sided A3-size posters, folded to make a thirty-four-page magazine and left unbound – allowing the reader to either flip through the resulting series of diptychs with one uninterrupted centerfold or remove individual posters and view each one in full. Each issue is launched in a specific setting, attracting lots of fans.

In the book Behind the Zines: Self-Publishing Culture (Gestalten), we see that people who feel the need to publish will publish, with a clear focus and without compromise, resulting in an array of interesting and intense magazines. A labor of love. If you have something to say or to share and you want to use the magazine format to do so, do it. The results can be pretty amazing. Whether they are big or small, let’s keep on reading magazines. Smell the paper, grope it with your fingers, look at the amazing images. Let the art in and spread the word.